YOU NEED TO CONSUME OPTIMUM NUTRITION FOR OPTIMUM IMMUNITY

In the 21st century it is absolutely essential to have the knowledge on ensuring you have an immune system which is fully functional 24/7. A depressed immune system will always lead to disease and unfortunately it is very easy today to have an immune system which is not functioning optimally due to multiple nutrient deficiencies, our exposure to a plethora of toxins, pesticides and EMF (electrical magnetic fields) along with chronic stressors in our lives which all significantly decrease our immunity significantly.

Did you know that up to 70% of our immunity lies in our gastrointestinal tract and there are multiple factors that can significantly decrease the health of our gut which lowers our immune response from low stomach acid, pancreatic insufficiency, leaky gut, low levels of secretory IgA which acts as our first line of defence against the entry of foreign substances into the body, through to gut dysbiosis which is an imbalance between our gut bacteria where we have too many pathogenic bacteria crowding out the healthy bacteria which will have a very deleterious effect on our immune system’s ability to fight off pathogens. I will explain how to ensure your gut immunity is in absolutely tip top shape and what blood and stool tests can tell you about your current state of gut and immune health.

MUSCLES ARE EMERGING AS A VERY IMPORTANT
ORGAN FOR ENHANCED IMMUNITY 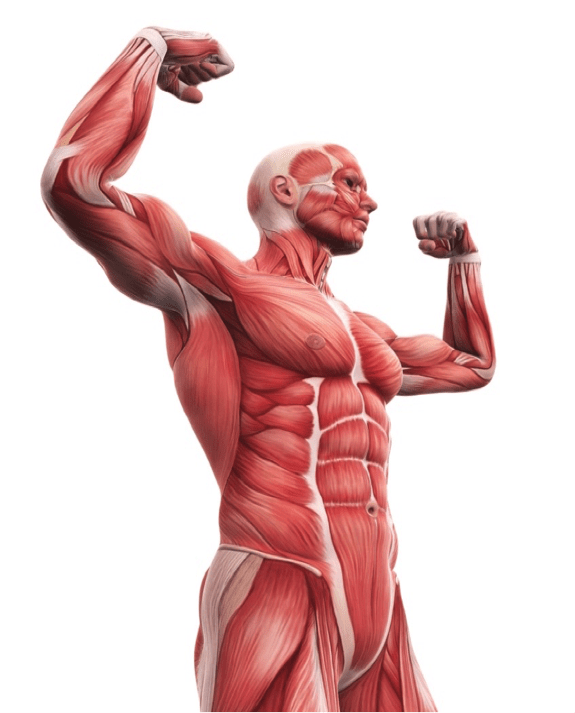 There is also a very strong correlation between the amount of muscle you have, and the strength of your immune system research is clearly showing that muscle improves the strength of our immune system. Also, as people age, they lose muscle this is known as sarcopenia and older peopled also develop something known as immunosenescence which refers to the gradual deterioration of our immune system thankfully the research is showing that there are a number of things that you can implement in your nutrition, exercise and lifestyle to significantly slow and even inhibit this immune decline as well as preventing muscle loss as we age.

Obesity and having insulin resistance also significantly weaken immunity and I’ll explain how this happens and what blood markers will indicate where you are in regards to insulin resistance in this ground-breaking webinar and why it is essential to lose excess fat if you are carrying it and focus on building muscle male or female if you want to build and keep a strong immune system.

LOOKS LIKE INTERMITTENT FASTING IS VERY POWERFUL FOR IMMUNE REGENERATION…

Fasting can also help to regenerate the immune system, even in the elderly, scientists have found. Research published by the University of Southern California has shown that fasting can lead to regeneration of the cells of our immune system.

When we begin to fast, the body initially breaks down a number of immune fighting white blood cells. It instinctively knows to start saving energy and one way it does this is by killing off old or damaged immune cells. But it quickly adjusts and triggers the regeneration of new cells, therefore increasing the number of immune boosting cells that we have.

This discovery led to further research into intermittent fasting and found that cells in the body that support the immune response and attack invading pathogens leave the blood stream when we stop eating as the nutrient content becomes low. They migrate to bone marrow, which is nutrient dense, where they begin to regenerate and become supercharged, and as a result better protect the body from infection. Learn what else the research is finding out about fasting and boosting immunity in this webinar.

Sleep also plays a significant roll in our immune strength and with so many people struggling with sleep today this also increases the likelihood of having a weakened immunity. For example, researchers from Germany have found that sound sleep improves immune cells known as T cells. “T cells are a type of immune cells that fight against intracellular pathogens, for example virus-infected cells such as flu, Covid 19, HIV, herpes, and cancer cells. The study found a new mechanism through which sleep can assist the immune system. I’ll explain why you must aim to get 8 hours of restful sleep and if you are not, I’ll give you some essential information ensuring you can.

WITHOUT THE CORRECT AMOUNT OF NUTRIENTS OUR IMMUNE SYSTEM WILL STRUGGLE TO FIGHT OFF VIRUSES, CANCER CELLS AND ALL PATHOGENS

From my research on how our immune system functions the most important discoveries for me is that the immune system cannot function optimally without an an abundance of certain nutrients like selenium, zinc, iron, copper, zinc, quercetin, B vitamins, vitamin D, vitamin C and omega 3 fatty acids. And from my clinical observations looking at hundreds of blood samples over several years these nutrients are very often deficient in most people’s diet and therefore compromising their immune system’s ability to fight viruses, cancer cells and other pathogens that we are exposed to daily.

WITHOUT THE CORRECT AMOUNT OF NUTRIENTS OUR IMMUNE SYSTEM WILL STRUGGLE TO FIGHT
OFF VIRUSES, CANCER CELLS AND ALL PATHOGENS

Also, of significant importance two British scientists discovered a substance scientifically proven to help prevent cancer in certain fruits and vegetables and I’ll explain what they are and how it works in this webinar as well as giving you the latest scientifically researched information to protect yourself from Covid 19 like what nutrients can help block Covid 19 from entering the cell and if it does enter what nutrient inside the cell can prevent its replication.

ENROLL ON THIS WEBINAR NOW

Stress and Your Immune System the Department of Psychiatry, School of Medical Sciences, at the University of Malaysia discovered that chronic stress prevents the rapid creation of infection fighting T-cells and prevents quick immune reaction. Over 293 independent studies from 1960 through 2001 confirmed that stress alters immunity. In the words of Dr. Lissa Rankin, author of Mind Over Medicine: “Our bodies know how to fix broken proteins, kill cancer cells, retard aging, and fight infection. They even know how to heal ulcers, make skin lesions disappear and knit together broken bones! But here’s the kicker those natural self-repair mechanisms don’t work if you’re stressed! “Its, only when you are in a state of relaxation do, they kick in and heal you.

I believe this is genuinely a lifesaving webinar for so many reasons for example, every two minutes someone in the UK is diagnosed with cancer. 1 in 2 people in the UK born after 1960 will be diagnosed with some form of cancer during their lifetime. Researchers are finding that a declining immune system plays a much more significant role in the development of cancer than previously thought. The great majority of cancers, some 90-95% of cases, are due to environmental factors. The remaining 5-10% are due to inherited genetics.

“I was introduced to Phil in mid-November 2020 by my sports coach. He had been on Phil’s training courses in the past and said he was brilliant. As I had exhausted all the avenues of pharmaceutical treatments, he called Phil and asked if he would speak to me.

When I first spoke to Phil (I live in Monaco) my prognosis was very bad. I suffer from diffuse large B cell lymphoma which is notoriously difficult to treat and just keeps coming back and back. I’d had 8 sessions of salvage chemo (the strongest that exists), a stem cell transplant which failed (the cancer was back within a month) and various other subsequent treatments which were having little effect on the cancer but annihilating my blood cells. The only other treatment that could save me was CAR T cell therapy, but I wasn’t eligible as my blood counts were so bad. One of my doctors told me that as hard as it was, I had to be realistic – nothing was working, I was just getting worse and worse and that I should think about starting to say goodbye to friends and family.

It was at this point that I spoke to Phil. He took a look at my blood tests and then explained everything that was going wrong inside me and the toxic environment my body was living in. He put me on a radical supplementation plan and told me to work with my coach to increase my muscle strength. When I saw the list of supplements, I nearly had a heart attack; not only did I not know what most of them were, but there was such a mountain of them to be taken several times a day that I was scared to even start. However, I decided to trust Phil and to go for it. What did I have to lose?

After about 10 days there started to be minor improvements in my blood counts and after 3 weeks the inflammation markers also started to come down. All major markers have been steadily improving ever since. This has allowed the doctors here to give me an anticancer medicine that they couldn’t give me before as my blood counts were too low. I’m now able to take the maximum dose of this medicine which is helping to reduce the large skin nodules (another nasty effect of this type of lymphoma). I couldn’t sleep before as the skin nodules were so sore that even slight contact with bedsheets was painful. I no longer suffer from that pain and have recently been able to have radio therapy on the nodules (to reduce them further) which again I couldn’t have before due to my sorry state.

Phil has since added more supplements to my protocol which now looks like mount Everest and regularly reviews my lab results. At my last consultation with the oncologist, the doctor was really pleased with my results and said, ‘whatever you’re doing just keep doing it!’. He said as long as I can stay alive and ‘well’ I will be able to benefit from some new drugs which are coming on stream this year that should be more of genetic match for my condition.

I cannot thank Phil enough, he got me back on the wagon when I was at my most desperate. As a Life Coach I’m a great believer in the power of positive thinking but even I was beginning to struggle with that before I started on Phil’s protocol. Last year people were saying let’s hope you make it until Christmas, this year I’m saying that I’m looking forward to Christmas 2021 and beyond.

Since I met Phil, I’m now a firm a believer that robust supplementation has to work alongside traditional medicine if you want to give yourself the best possible chance. On Phil’s recommendation I have sought out a doctor (privately because the traditional hospital doctors don’t believe in this) who can give me IV vitamin C. My nurse (Polish) also told me that a number of her patients are using it with great success. So that’s the next step and to keep on working hard to stay on Phil’s protocol to give my immune system the very best chance of fighting off the invaders.

ENROLL ON THIS WEBINAR NOW

Book below to receive Zoom details to watch this webinar LIVE…

WHAT OTHERS SAY ABOUT PHIL’S WEBINARS…

, so much information! Can not recommend your blood panels highly enough. Life changing and saving!

“A great webinar mate, with loads of good information. Can’t wait for the next ones.“

“Great info Phil you obviously put a lot of time into the research and could see your effort in the desire to present ethical and accurate information, thanks a lot for all your time”